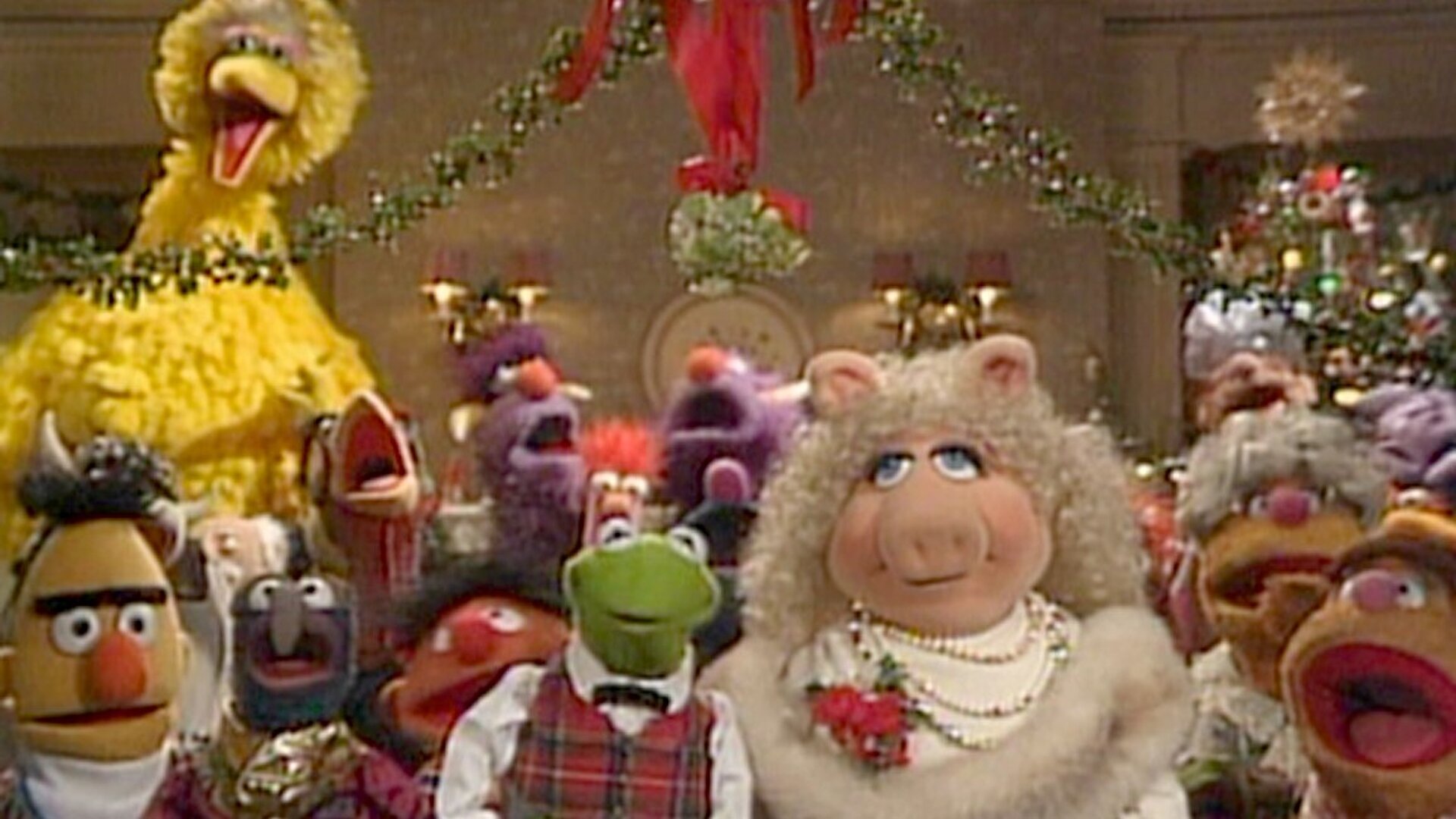 I LOVE Christmas specials! I also love character crossovers! The late-great Jim Henson, no doubt, had a huge impact on all of our lives. To most of us, it was through his puppet creations Remember when Jim Henson’s most popular creations from The Muppet Show, Sesame Street & Fraggle Rock came together under one roof, on a farm house, in the middle of the country, on Christmas Eve, during a snow storm? Surprisingly…not a lot of people do.

A Muppet Family Christmas, premiering on ABC on December 16, 1987, 3 years before Jim Henson’s death, is one of the only, if not the only, crossover between The Muppet Show, Sesame Street & Fraggle Rock. Kermit, Fozzie and the Muppets drive to Grizzly Farms, a farm owned by Fozzie’s mother, Emily, ruining her plans to run off to Malibu for the holidays and rent the house out to Doc (played by the late-great Irish-Canadian Gerard Parkes) and his dog, Sprocket, and ruining Doc’s plans for A NICE, QUIET CHRISTMAS. Soon the Sesamigos (that’s my nickname for the Sesame Street characters) and Fraggles join in and, as you may have guessed…hijinks ensue. Dr. Teeth and The Electric Mayhem preform a cover of Jingle Bell Rock. Fozzie finds a new partner for his comedy routine (made out of snow no less). The Sesamigos rehearses their Sesame Street Christmas Pageant as they reenact The Night Before Christmas. The Swedish Chief attempts to cook Big Bird as the Christmas Turkey and Miss Piggy gets caught in a snow storm. It’s a delight. While not exactly plot driven, the focus is more on jokes, atmosphere, musical numbers and Christmas traditions. Kinda like how It’s The Great Pumpkin, Charlie Brown has a lot of Halloween traditions, like costumes, trick-or-treating and bobbing for apples. You can’t help but think about the holiday itself. Basically that and while kids can enjoy their favourite Jim Henson characters doing those Christmas traditions, adults can enjoy a little tongue-in-cheek humour that would fly over most kids heads. Doc has a nice little character arc too (SPOILER ALERT). Going from wanting to spend Christmas alone with Sprocket to dressing up as Santa for the new friends he opened himself up to. A delight…so…why isn’t it getting as much attention as it did in the late 80s and 90s? Why hasn’t it been broadcast on TV in years the same way that made Chuck Jones’ adaptation of Dr. Seuss’ How The Grinch Stole Christmas, A Charlie Brown Christmas and Rankin/Bass’ Rudolph the Red-Nosed Reindeer perennial favourites? Why hasn’t it been re-released on DVD since 2001? Well, I’m not 100% sure. But I have a couple of theories. Two words: Intellectual. Property.

After Muppet Treasure Island failed to break even worldwide, The Jim Henson Company had a falling out with Disney and formed a new partnership with Sony Pictures, to whom TJHC licensed their distribution rights to their various TV specials, shows and movies. As you may have guessed, it was Sony Pictures Home Entertainment who handled A Muppet Family Christmas’ first and (so far) only DVD release back when they were called “Columbia TriStar Home Entertainment”. That was in 2001. That same year, TJHC sold their ownership of the Sesame Street characters, as well as their equity stake in their joint-venture with Nickelodeon, Noggin, to CTW (Children’s Television Workshop), who then changed their name to Sesame Workshop. Three years passed and TJHC sold their ownership of The Muppets IP, as well as Bear and The Big Blue House IP, to Disney, who then formed a new division called The Muppet Holding Company, which was later renamed The Muppet Studio. In addition to their IP, TJHC also sold Disney their distribution rights, ownership and copyrights to their Muppet TV specials, shows and movies. Some exceptions being….The Muppets Take Manhattan, Muppets From Space, Kermit’s Swamp Years, and It’s A Very Merry Muppet Christmas Movie, just to name a few. Three of those films being owned by Sony and It’s A Very Merry Muppet Christmas Movie being owned by NBCUniversal. While A Muppet Family Christmas wasn’t co-produced by any other studio or production company, it does feature other Jim Henson characters besides The Muppets. While the special itself is called A Muppet Family Christmas and The Muppets are the first characters we see on screen and arguably have more screen time then the Sesamigos and/or Fraggles combined, at the same time, the Sesamigos and Fraggles aren’t just one-off cameos. They’re actually a part of the story (or lack thereof, seeing how it’s not exactly plot driven). TJHC still owns the Fraggle Rock IP and produced the special itself. While TJHC doesn’t own the Sesame Street IP, they did own the characters and the rights to use them for cameos and crossovers with their own productions up until they sold them to CTW. But does buy the Sesamigos give CTW ownership of TJHC’s specials/shows/movies featuring the Sesamigos? Not likely. Disney buying Marvel doesn’t give Disney ownership of the Marvel movies made by other studios before. Or since. Unless THAT studio is 20th Century Fox. However, Kermit The Frog made an appearance in another Jim Henson Christmas Special, The Christmas Toy and when HIT Entertainment (through Lionsgate) released it on DVD in 2008, Kermit’s scenes were cut out due to legal issues with Disney. Those scenes were later reinstated on Prime Video. While Kermit’s appearances haven’t been cut from episodes of Sesame Street, CTW can’t use him for new sketches and Disney forbid CTW from reusing old sketches from previous episodes for new ones. Furthermore, the Sesamigos’ cameos were not cut from the Muppet specials, shows or movies. Not even the ones Disney owns. But, again, their appearances in A Muppet Family Christmas aren’t few-second cameos.

So, in addition to the music copyright holders of the various songs in the special that are NOT under the public domain and may have been only licensed for TV broadcasts only (which is why a lot of the scenes were cut from home video releases), there are four other companies involved here. Disney, The Jim Henson Company, Sesame Workshop and Sony Pictures, who handled the 2001 DVD release and presumably still own the home video distribution rights either directly or under exclusive licence from TJHC. TJHC’s distribution deal with Sony is still active as DVDs or Fraggle Rock, The Dark Crystal & Labyrinth are still being distributed by Sony. No wonder A Muppet Family Christmas hasn’t been re-released on DVD. Between the music rights, distribution rights, and charter rights, how can they? Heck, we’re lucky to still have SpiderMan in the MCU. How can we expect Disney and Sony to work this out? I suppose this rights issue went on for so long that everyone just forgot about it. Heck, I forgot about it until 3 or 4 years ago.

It may be out of print. But there is hope yet. There’s a petition on Change.org to get the copyright holders to work something out and get A Muppet Family Christmas re-released on DVD and maybe even Blu-ray. Or at least Disney+. Or ABC network broadcast. Further more, even though it’s out of print, you can still find the last remaining DVD copies on Amazon.com. For a hefty price, that is. If you’re not willing to pay it, there’s always YouTube. Either way, we cannot let this special fade into obscurity. Especially since a crossover these characters will likely never happen again. Then again, Disney was able to do intracompany crossovers with Sony on the MCU SpiderMan Trilogy and with Universal on M. Night Shyamalan’s Glass and they have been on good terms with TJHC lately between Alexander and the Terrible, Horrible, No Good, Very Bad Day and the Disney+ Original series, Earth to Ned. But Sesame Workshop has something against Disney for whatever reason. So the odds are slim. Now, with the Disney-Fox merger in mind, I wish New Regency didn’t cancel their Fraggle Rock movie starring Joseph Gordon-Levitt (thanks a lot, AppleTV+) and Fox didn’t give the upcoming Sesame Street movie starring Anne Hathaway…away to Warner Bros. Who knows what those would’ve lead to. But I digress. Our only chance is if said petition reaches its goal or if Disney buys TJHC next. Just support the official release or lack thereof and hopefully by next Christmas, A Muppet Family Christmas will be re-released on DVD. It’s worth the effort as well as the attention. It doesn’t deserve to be forgotten. There’s a reason it’s right up there with Rankin/Bass’ Rudolph The Red-Noised Reindeer and VeggieTales’ The Toy That Saved Christmas as my Top 3 Favourite Christmas Specials. There’s a reason it was one of Jim Henson’s personal favourite Muppet projects. It’s funny. It’s heart-warming. This…was Jim Henson’s Gift…to The World.