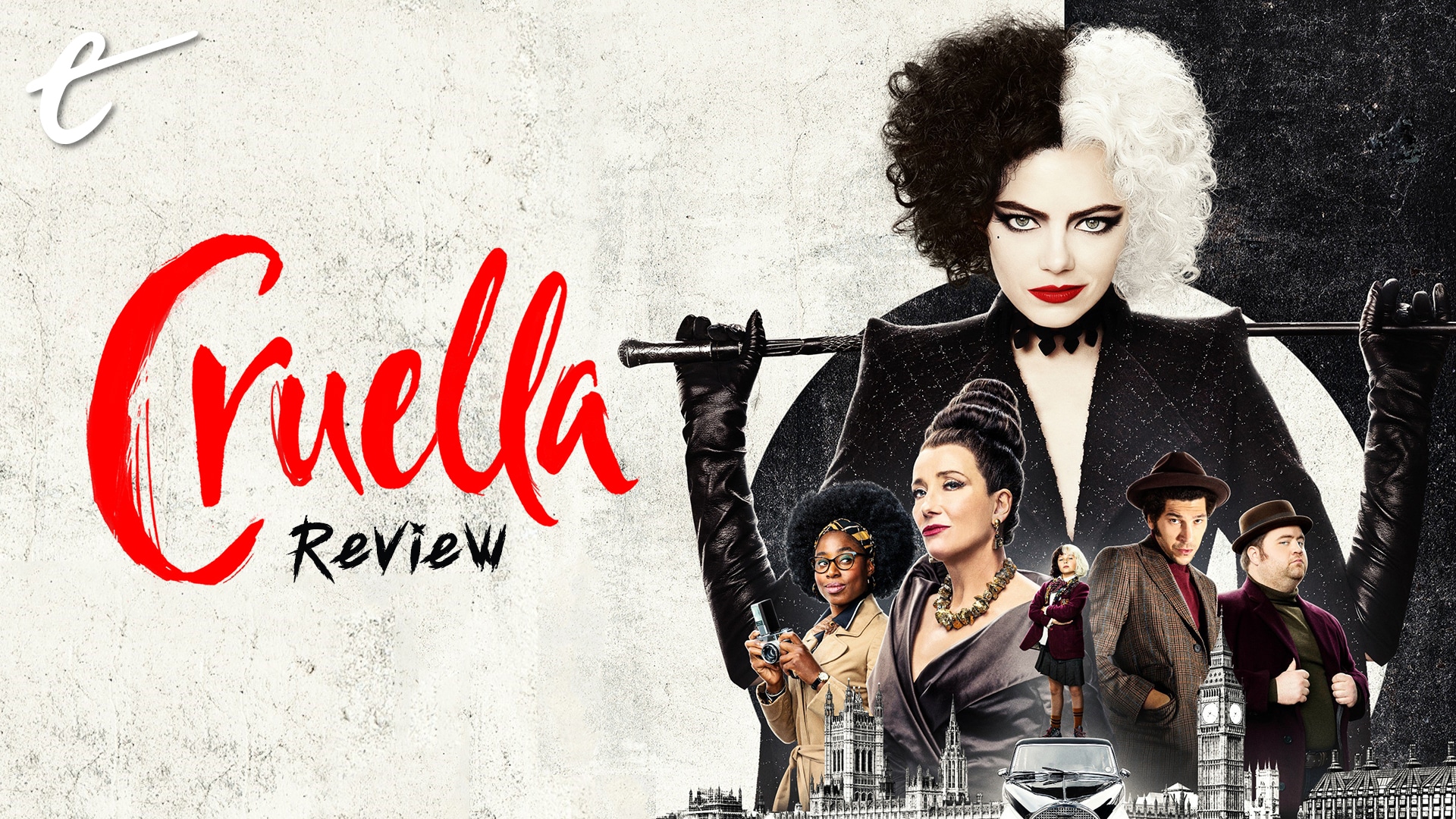 When thinking of the name Cruella we think about the devilish villain from the classic 101 Dalmatians, not Emma Stone in cosplay for roughly 2 hours and 14-minutes. Disney has become notorious for their live-action remakes of their beloved cartoon films. And, when I had heard they were making a live-action origin story for Cruella De Vile, I had my frown not turn upside down. There were a lot of questions going into CRUELLA for me and my biggest one was “Why?” and “How will they villainize Dalmatians?”.

First off let’s begin with my POSITIVES. The production design within this movie is absolutely top-notch. From the London sets that set up an eerie, but also vibrantly fashionable old London, with the neon dripping off the screen. Along, with the set design, the costume design is without a doubt in-capturing just as much as the sets are, with each new dress that Estella wears throughout the film always pops straight off the screen. Other than the look of the movie Paul Walter Hauser, become the stand-out role of this movie, with stealing almost nearly every scene in this and yes, stole them from Emma Stone. Paul plays the henchman Horace, who in this film is more of a loveable, goofball, child-like presence that adds a nice switch of tone from both Emma Stone and Emma Thompson. Unfortunately, that is about all that really stood out to me when it comes to this film.

I was skeptical about Cruella after the trailers simply off the fact of saying “Oh, Disney is making ANOTHER remake of a beloved classic” or in this case an origin story for a villain of a movie about Dalmatians. It’s even more lackluster when you realize that the award-nominated actress Glenn Close as Cruella De Ville in the previous live-action rendition. My biggest problem with the film is how they decided to villainize Dalmatians enough to get Cruella to hate them so much that she wants to be rid of them. And, without spoiling the “why?” all I can say is Dalmatians are super friendly animals and more than likely would never do what this film portrays them as. As I said at the start Emma Stone wasn’t “bad” but felt like she wanted to try and do something on her own and try to beat out Emma Thompson in whatever way possible to the point where I felt disconnected from Estella and Horace and Jasper’s family relationship within the movie. that is setup relatively early. Emma Thompson’s character The Baroness just feels super un-bare able through the entire movie. She is the villain, yes, but when the villain is nothing short of obnoxious, loud, and quite annoying to the point that you would just rather get caught in the film for trying to get rid of her and not try to take her down slowly because you just can not stand her anymore. And, that is not to Emma Thompson’s fault, it solely lies within the writing of the character. They try so hard for us to not like her that it becomes a chore to watch. Now, the one thing I don’t seem to see people talking about and that’s the soundtrack. The first thing I thought of when thinking about it, was the Baby Driver or Guardians of the Galaxy soundtracks. And Cruella tries its best at being something of that sort where they want this song that incorporates within the story, but they didn’t put any thought or any type of cohesion, whatsoever and just through whatever they thought worked at the screen and shipped it out to theaters.

In conclusion, Cruella fails at adding anything new to the character Cruella De Vile and does nothing for the supporting characters in terms of their arcs, in a bloated 2 hours and 14-minute runtime and doesn’t do anything interesting enough to warrant that runtime. This film might not be for me, but there will be people and children who love this movie. I’d recommend waiting to watch this for free on Disney+ when it releases in a few months.