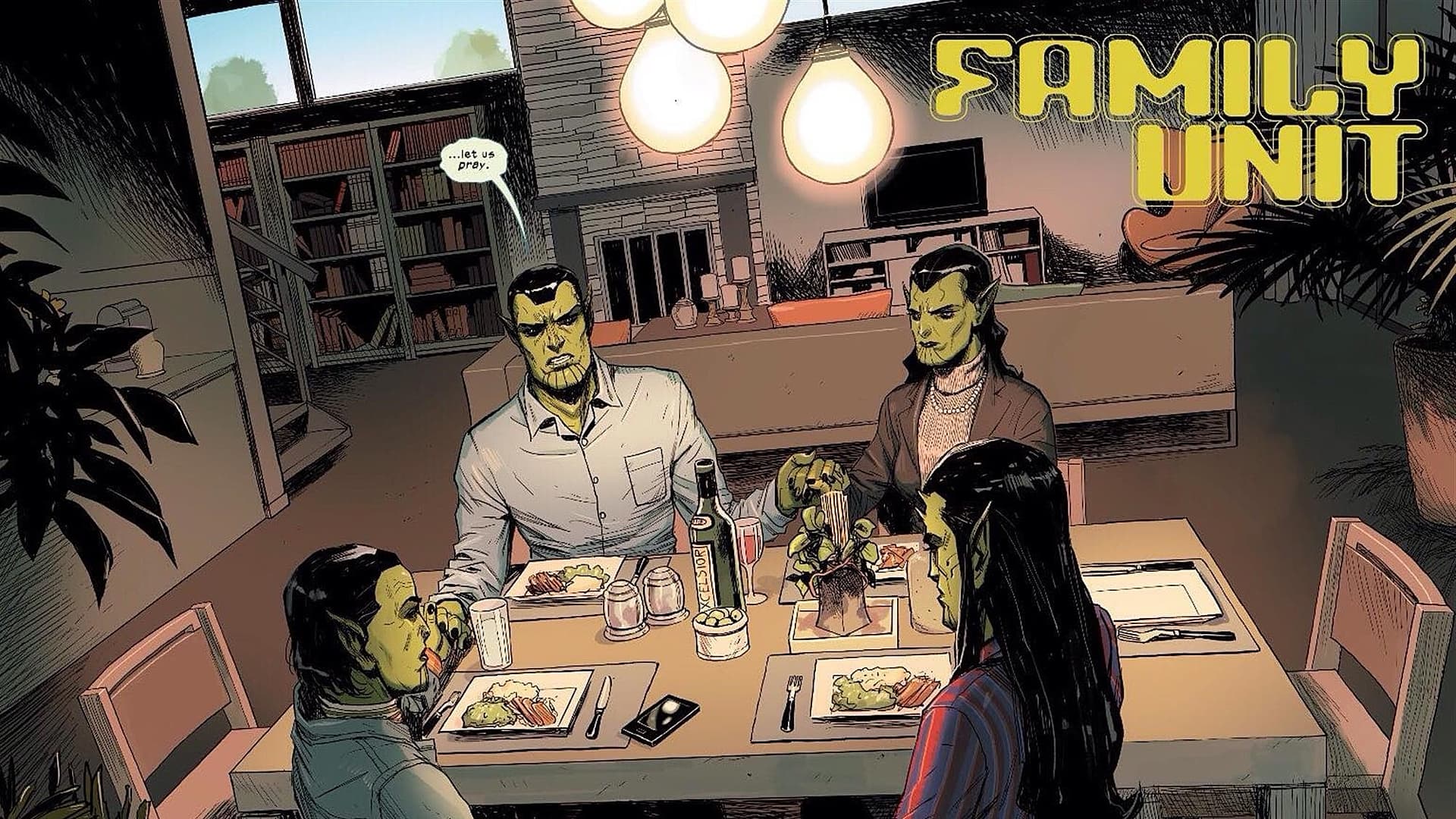 Whenever I’m looking to purchase comics to read (DC or Marvel), I find myself not always looking at the classic stories and gravitating towards the more obscure lineup of characters and stories. Whether it’s the violent exploits of Marvel’s Moon Knight or the over-the-top sci-fi with a Guardians of the Galaxy line-up that includes Kitty Pryde as a new Star-Lord and Ben Grimm (aka, the Thing!), I gobble these stories up. Don’t get me wrong, I love classic comic stories from both companies, but I also feel that the overlooked content deserves a chance. So, when I picked up the collected volume of writer Robbie Thompson’s Meet the Skrulls, I was excited to have found a new Marvel story that seemed totally unique!

Meet the Skrulls centers on the Warner family, a seemingly normal family of four who in secret, are actually Skrulls. If you aren’t familiar, Skrulls are shape-shifting aliens whose planets have been destroyed in a war with another alien race, the Kree. They made their movie debut in 2019’s Captain Marvel, the same year this comic debuted. Anyway, the Warners have infiltrated Earth, using their skills to spy and prep our planet for invasion. However, family troubles after such a long period of deep-cover stat to brew, and the secretive Project Blossom may affect the mission. Will they succeed or fail? Well, you’ll have to read to find out, but I can promise you, the five-issue storyline is a great quick read.

For such a compact storyline, Meet the Skrulls balances two things really well: the spy element and the family dynamic. It’s cool to see a story that focuses solely on seeing the Skrulls infiltrating places like Stark Industries. The fact that the Warners also kind of lie between the role of villain and hero also kind of adds to that whole espionage feel rather nicely. The family dynamic, however, takes center stage and helps ground the story. The younger child, Alice, feels like an outcast as she is not as resourceful with her abilities, and there is even conflict between husband Carl and wife Gloria. They feel like a relatable family as they work through and resolve their issues. Thompson’s writing helps convey the usual yet timeless family themes and seamlessly blends in the Skrulls’ analysis of their mission into regular family talks. It’s kind of weird, yet funny at the same time.

I also really enjoyed the artwork from Niko Henrichon, who worked on all five issues. Henrichon’s illustrations capture a visceral sense of action in the Skrull War flashbacks, and poignant family moments that evoke sympathy and drama. The rich color palettes work well for the common suburb home, but also evoke a sort of a sci-fi feel that isn’t overly shown, but most definitely has a strong presence. It’s got a great modern vibe that I just really related to, which is a staple element that many have talked about regarding the Marvel brand.

To conclude, Meet the Skrulls may be a quick read, but as a self-contained storyline about family hat also contains an interesting new side to some of the most popular Marvel villains, it’s as entertaining as they come. It’ll never reach the heights of the more classic Marvel titles, but if you find it online or in a comic store, I recommend you pick it up. It’s got everything you need for a resonant story, while also giving you a good dose of typical Marvel fun!

‘The Falcon and the Winter Soldier’ Series Review